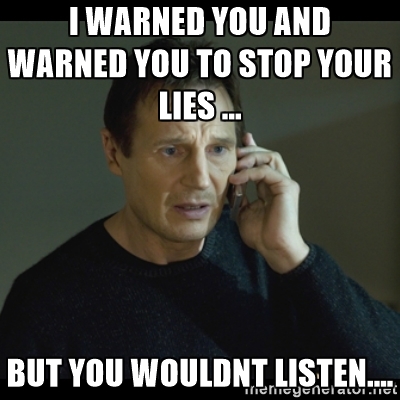 As a child, there’s always something that you’re getting in trouble for or known for in your family that will live on in infamy.  My pitfall?  Lying.  My mother would tell you I used to lie relentlessly.  I would lie like it was a language I was fluent in.  She would ask me a question so simple, and a lie would roll off my tongue like water.  It was bad, y’all.  The worst part was I usually got caught in my lie, and didn’t lie very well; which led to tons of yelling, disappointment and a good helping of corporal punishment (or what some of us like to call a good ass whooping).

Now that I am clear into my adulthood, I often look back and wonder why I lied so much?  Why was it so easy to tell my mother I liked an outfit that I really didn’t; causing her to spend money she didn’t have to spend?  Why was it simple enough to tell her I was doing well in school when really I was almost failing two classes?  Why did it appear to be lesser of the two evils to tell her what I knew she wanted to hear, as opposed to telling her the truth when I knew one thing she hated most in life was a liar?

Did I want her to hate me?  No.  I wanted her to love me.  I wanted to be a child who didn’t always get in trouble; and in my eyes, the real truth meant trouble.  So to eliminate that, I decided to lie about some of the simplest things, which ultimately led to me getting in more trouble than I had originally would have been in (the irony).

Truth is, lying has been glorified to some degree as a means to show how much you love someone.  I can’t remember exactly which movie this came from, but I remember someone saying “I lie because I care enough to spare your feelings!” *insert major side-eye here*. Yea, I hear that now and it sounds like crap.  Lying to someone who’s only wish of you is to be honest with them is silly.  I clearly grew up learning this the hard way, as I seemed to not believe this until I got older.

Anytime I wanted to tell the truth, I thought that I would feel the unholy wrath of my mother far worse than if I told a lie.  I figured a lie would buy me some time in the “good child” department, so I went that route; only to find out that the punishment on the lying side of life was just as brutal, if not worse than the consequences for telling the truth!  I couldn’t win for losing.

One day, when I transitioned into “grown-up with bills and adulting struggles”,  I realized a shocking truth about moms; you’re allowed to disagree with them, and they won’t slap you in the mouth! Lol.  There used to be a time in my life where being blatantly honest with my mother scared the hell out of me; I imagined a thorough lecture on how I wasn’t “grown” and then it possibly end in some form of physical discipline.  That was something I just wasn’t down to hear.  Now, I can easily tell my mother the God’s honest truth about something and she won’t care (usually this means she will still do what she wants anyway, but at least I didn’t have to lie to her, lol).  I must say, telling the truth is a lot less stressful than telling lies, which I thought would be my lifelong occupation, lol.

My only fear is that I didn’t conform in time, and my daughter will inherit this nasty lying trait that her mother once had.  I have a feeling karma is coming in all its glory for me, and I am not ready.   Truth be told, she already accuses me of things I haven’t done and I wonder, “Is this it, God?  Is this the chapter of our lives when we go through lying?  But she’s so young!  I thought I had more time!” Smh.  This is life I suppose.

So, for all you pre-adolescent, adolescents and teenagers out there; love your moms.  Be honest with them because they would rather you be honest, than have them go through all this trouble for something that wasn’t even true.  Trust me, I’ve lived to tell the tale.

Despite what you may think, honesty really is the best policy. 🙂

This site uses Akismet to reduce spam. Learn how your comment data is processed.